Chika Unigwe was born on 12 June 1974 in Enugu, Nigeria, the sixth of seven children. After completing her secondary school education at Federal Government Girls’ College, Abuja, she went on to earn a BA in English at the University of Nigeria, Nsukka, in 1995.

That same year, following her marriage to a Belgian engineer, Chika moved to Turnhout in Flanders, Belgium’s Dutch-speaking region. The couple have had four children.

In 1996, she obtained an MA in English from the Catholic University of Leuven (KUL), and then earned a PhD from the University of Leiden, The Netherlands, in 2004, for her dissertation entitled “In the Shadow of Ala: Igbo Women Writing as an Act of Righting”. 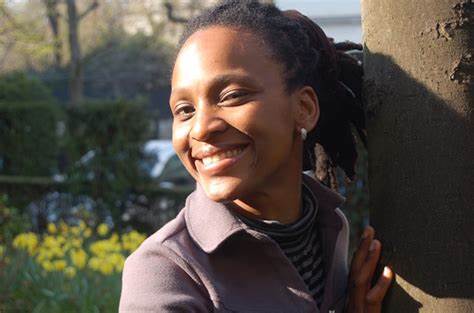 Chika spent two years in Seattle from 2000 to 2002, but otherwise resided in Belgium until 2013. During that time, she pursued her writing career, but also engaged in other activities, such as sitting on the Turnhout town council, and teaching Flemish to immigrants. In 2013, she moved to the Atlanta area in the USA.

Chika is Creative Director of the Awele Creative Trust, and she was a judge for the Man Booker International Prize in 2016. In 2016-2017, she was Bonderman Professor of Creative Writing at Brown University, Providence RI, USA, and then went on to lecture in creative writing at Emory University, GA. In 2020-2021, she will be joining Georgia College and State University’s MFA in Creative Writing as a core faculty member.

Over the years, Chika has received many prestigious awards and distinctions. A selection of these include: Winner of the 2003 BBC Short Story Competition for the short story “Borrowed Smile”. Nominated for the 2004 Caine Prize for African writing, for the short story “The Secret” and Winner of the 2012 NLNG Prize for Literature, for the novel On Black Sisters’ Street

PrevPrevious#LadyBossInterview: ”Innovation they say is the father of all businesses while marketing is the mother!”#LLA Meets Lady Boss, Aderonke Onipede, CEO and lead facilitator at Acomms Media Limited.
Next#LLABlog: Meet Adelle Onyango, Kenyan media personality, podcaster and founder of the Adelle Onyango Initiative.Next