‘While I was being harassed, I didn’t fight back, I didn’t understand what they were doing, I just knew I didn’t like it” – #LLA Meets Adebara Adebimpe’’, Child Sexual Abuse Prevention Advocate and Founder, Piece Of My Heart Foundation.

Adebara Adebimpe is a 22 year old who was Orphaned at age 6 and separated from her two older siblings to live with her Grandmother where she was sexually abused by her uncle who though didn’t succeed fully left her with a mental scar. She was also scarred by her uncle’s son who tried repeatedly to abuse her. As is the norm with victims of sexual abuse, she retreated into herself, using silence as a coping mechanism for the abuse.

“So many times, I felt like giving up on life. I felt like dying sometimes and I blamed my parent for bringing me to the world, when they knew they wouldn’t be there to take care of me, but there was something in me that never wanted to give up. I was so determined to succeed and make impact.”

Today, on our impact and community series we sit with this trailblazer Adebara Adebimpe, Founder- Piece of My Heart Foundation’ an initiative that advocates against child abuse, offer trainings and education to children, create awareness among teachers/parents/children on the dangers of sexual abuse to children. 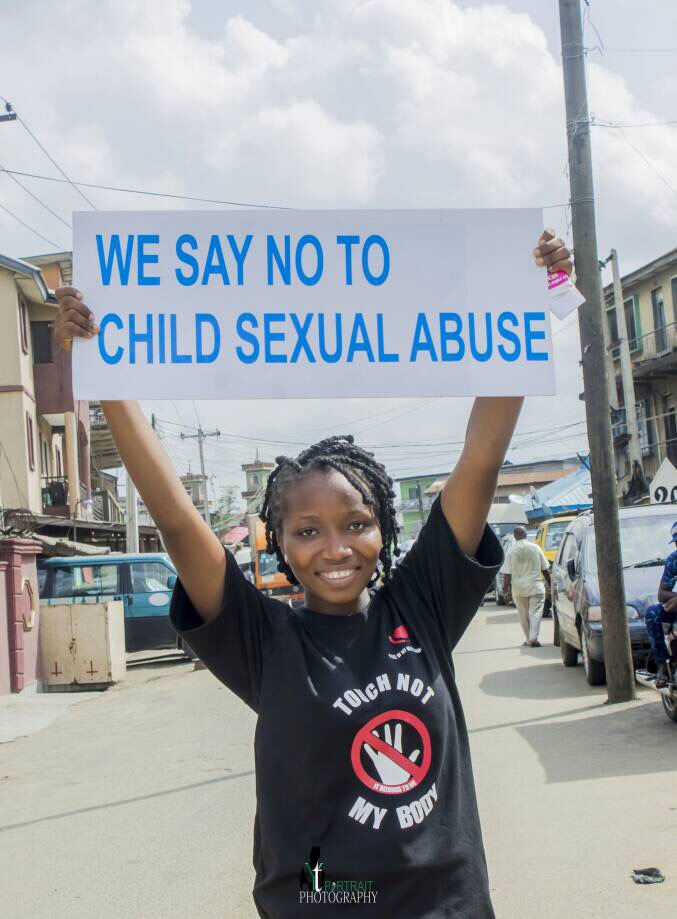 Tell us, what happened during those years? Did your siblings ever reach out, How did you cope with the sexual harassment?

My siblings and I kept in touch since we attended the same church, they are the best siblings ever. During those years we weren’t so close like other siblings, but we loved one another. With regard to being harassed, I never told anyone about it because I didn’t even understand that I was being harassed. I kept it to myself, the first time I mentioned it to anyone was when I was 22 years old. At 21, I started remembering those scenes that made me know that I was truly harassed. So I had to force myself back to my childhood and I started remembering how it all went, I even remembered that after the abuse I compelled other children to sleep on themselves which I think was as a result of the impact the abuse had on me. 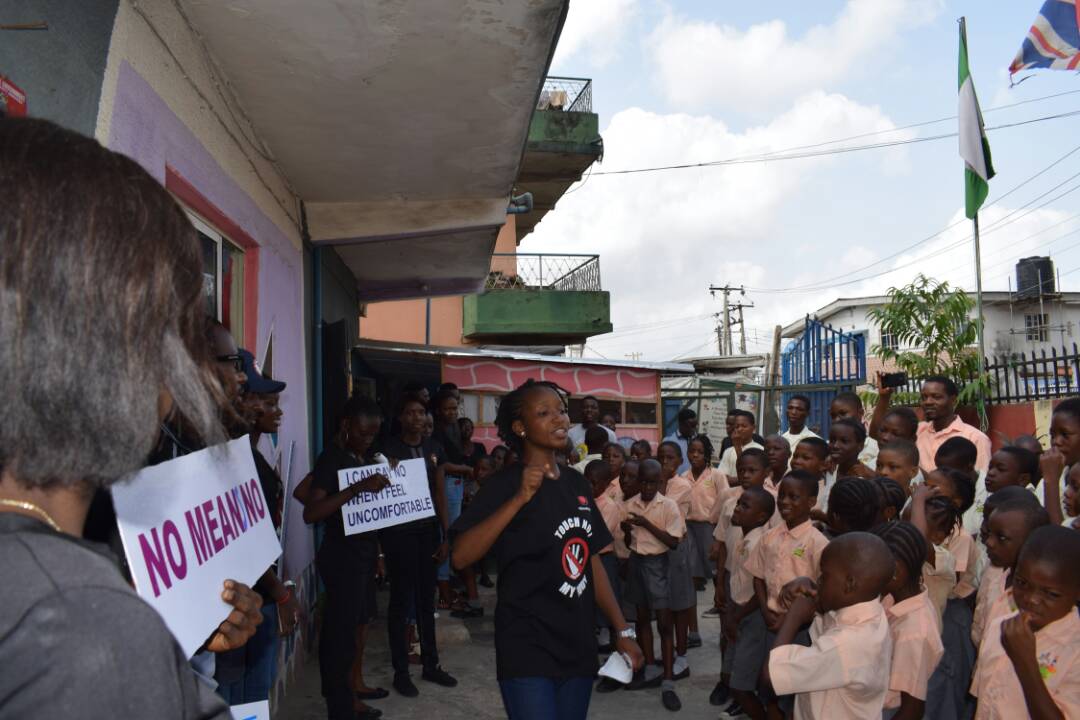 Another effect of the abuse I noticed was that I hated the whole idea of sex, I kept myself for that reason for a while before I met Jesus and I chose sexual purity. I was able to cope because I didn’t stay long with my abusers, and I tried to avoid them. Since I started living with my adopted mother, she never allowed me visit to anyone during the holidays. Also, I would get very angry when I see my abusers, I am sure they thought I have forgotten about it, until I learnt to forgive and see them with the lens of love.

After a year your maternal aunt adopted you, who was a single mother with 3 children, she took you in and treated you as her child. You struggled with poverty and the mental impact of being alone along side the psychological impact of the assault. You started working at age 16, had 4 more sexual harassment scenarios, At work, school and most recent at a friend’s house…

At this point, what was going through your mind, did you ever consider giving up and succumbing to the harassment?

During those times that I was being harassed I didn’t fight back since I don’t even understand what they were doing, I just knew I didn’t like it, these were people that I respected and loved because we were family and so it wasn’t easy to shout or do anything. I never felt like succumbing to the harassment, deep down, I felt it was wrong.

So many times, I felt like giving up on life, I felt like dying sometimes and I blamed my parents for bringing me to the world when they knew they wouldn’t be there to take care of me, but there is something in me that never wanted to give up. I was so determined to succeed and make impact. 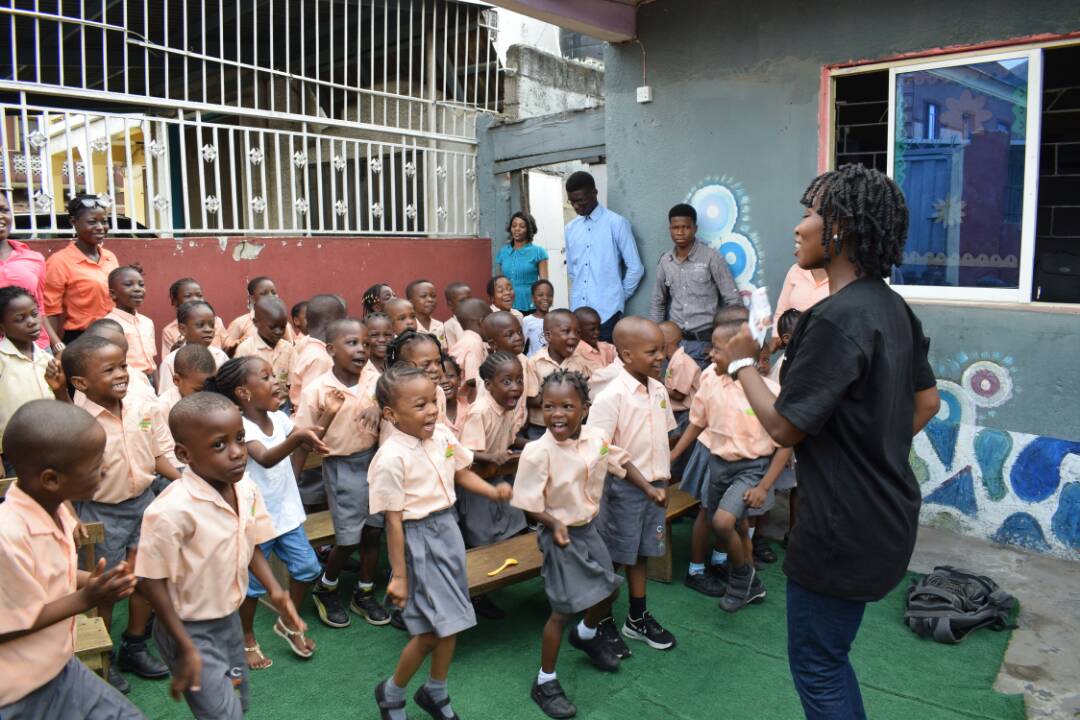 The mental impact of these experiences on you was a lot, did you reach out for help or talk to anyone?

My church sponsored my education taking over from a family member. I joined girl auxiliary in my church where I was required to teach Sunday school for 3 months as part of my project. I was in SS 1 when I discovered my love for teaching. Following the trauma I faced from being assaulted by close relatives and telling no one, I personally struggled with the psychological impact it had on me and most times took to reading books to take my mind of it.

Eventually this led to “Piece of my Heart Foundation” an NGO I founded to preach prevention and advocate against child abuse. We also offer trainings and education to children, create awareness among teachers/parents/children on the dangers of sexual abuse to children. Since Piece of My Heart Foundation started Jan 10th, 2018, it has reached about 2300 children, been to the streets to educate market women, seminars, to churches and beyond to teach people on the subject matter. 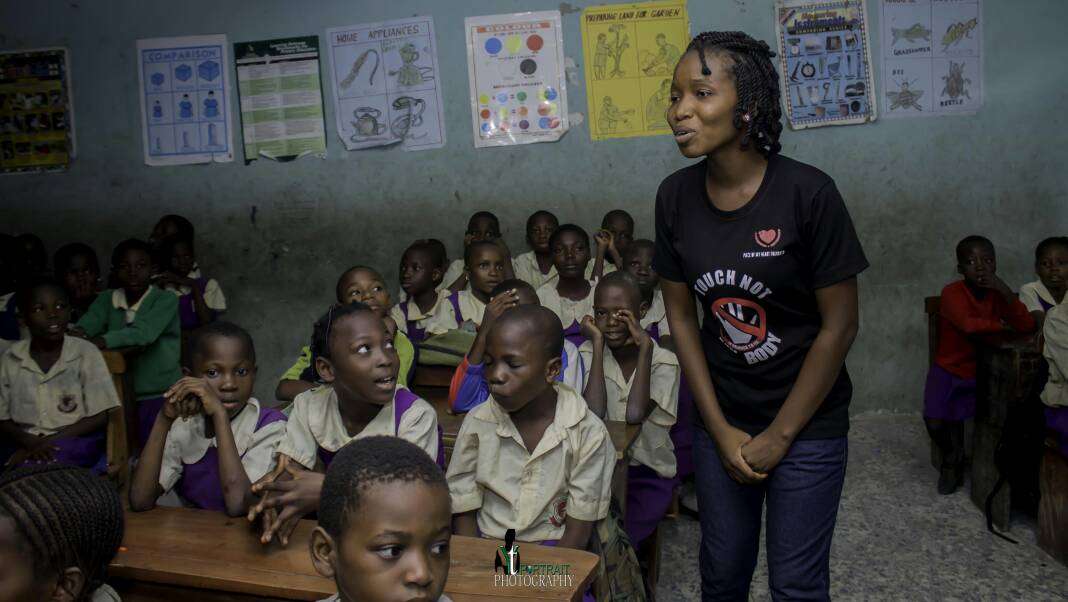 At what point did you start to nurse the idea of sharing your story and giving back to the society?

The idea of giving back to the society has been on my mind since I was 14, this was largely influenced by the gesture of the pastorates of the church who took up my schooling expenses as well as that of my sister. So, I started celebrating my birthday at the orphanage and volunteered for outreaches too. I got the vision to start my foundation in 2017 and it started in January of 2018. I still volunteer when I am free; this is the first time I will sharing my story in detail.

How do you balance your studies with what you are doing?

I do my best to manage my time, and I prioritise what is important; most times I sacrifice my leisure time. I leave school immediately after lectures to tutor children and I do make up for people occasionally too.

Can you share some impact stories from the initiative?

We met a girl in one of our school tours, an 18 year old who was sexually abused by her stepbrother. She spoke up and we called her parents and took the necessary steps to help her. We believe that prevention is better than rehabilitation. She currently is a Computer Science student of Yaba College of technology and does make up / teach extra lessons on the side/during weekends to get funds. 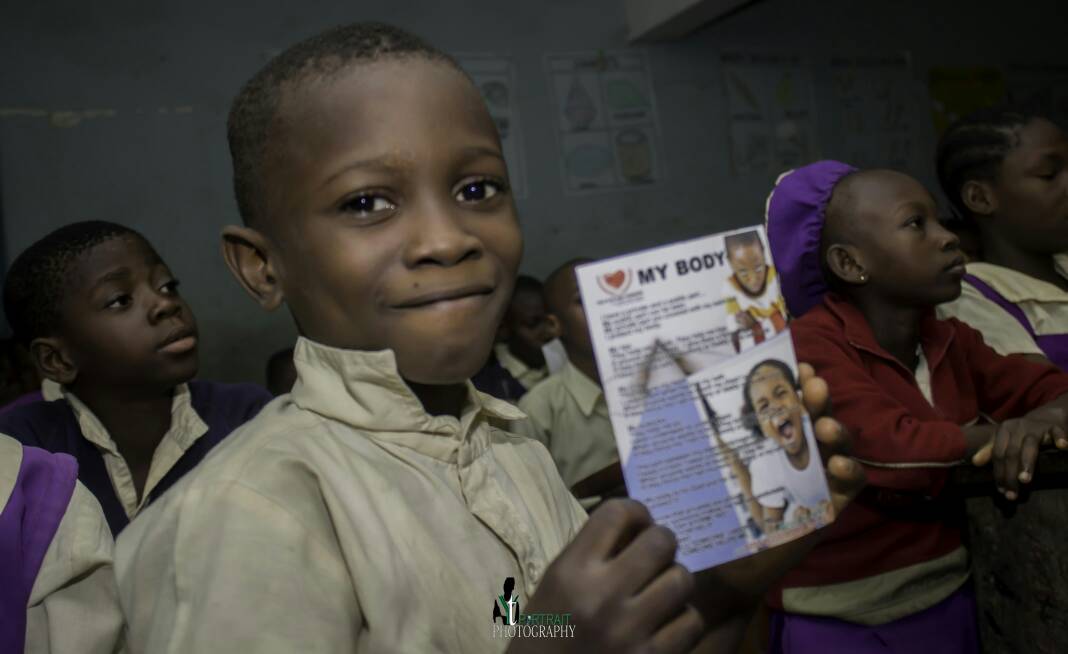 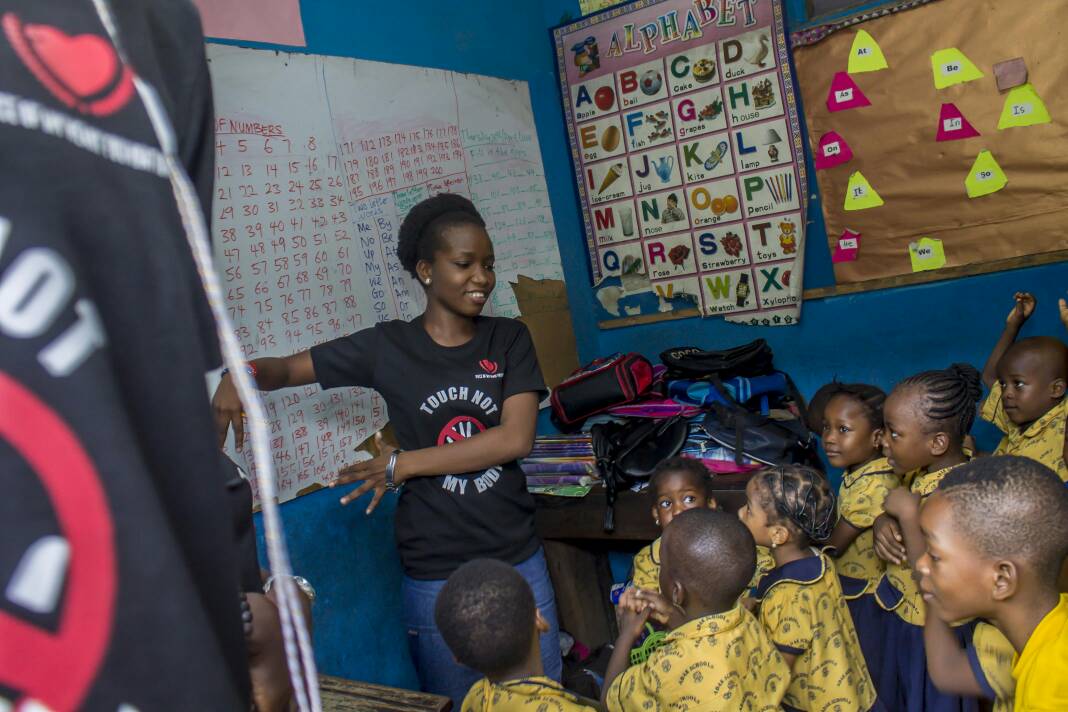 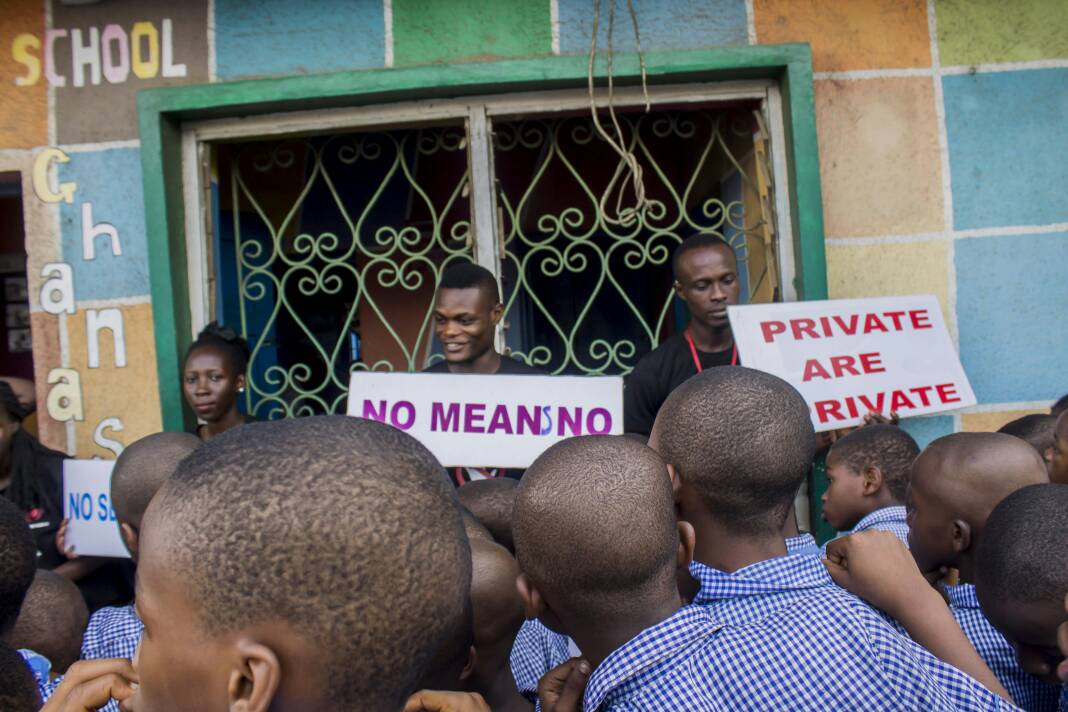 Wow! That is so amazing, so tell us what inspires you?

God has been my main source of inspiration. I knew God early in life which really helped me to become who I am today. I also get inspiration from reading good books, talking to people and the passion to help other people like me too

Do you have any female mentors, Who are they?

Yes I do have female mentors, they have been a source of inspiration to me, They are a lot.

What are your dreams for your future? The next 5 years?

I dream to own a platform where less privileged children can get quality education at subsidised rates, be a certified teacher, emotion coach and a mentor to many as I daily impact lives especially young people.

The LLA Grassroot Series is a monthly interview series that highlights the achievements and journey of African females who have demonstrated exemplary initiative at the grassroots level.

The vision is to showcase the Leading Ladies who are transforming Africa and the African narrative through impact at the community level.

It is an off-shoot of Leading Ladies Africa, a non-profit that promotes leadership, inclusion and diversity for women of African descent.

If you know any kick-ass women of African Descent doing phenomenal things at the grassroots level, email lead@leadingladiesafrica.org, and she could possibly be featured.

PrevPreviousSouth African Sibahle Mtongana is Changing the African Culinary Space.
Next“An Arab woman is raised with a million battles that she has to resolve before she can even start believing in herself” Ghada Wali- Award Winning Graphic Designer &First Egyptian Woman in the World to make the Forbes Europe’s 30 Under 30 list.Next