A Nigerian, Esther Agbaje, has been elected into the Minnesota House of Representatives in Tuesday’s United States general elections. Agbaje won by a landslide, scoring a total of 17,396 votes, which represents 74.7% of the total ballots cast.

Her closest rival, Alan Shilepsky, a nominee for the Republican Party, scored 4,126 votes, which represents 17.7% of the total votes cast.

She will represent District 59B in the 134-member House on the platform of the Democratic-Farmer-Labour Party, an affiliate of the Democratic Party. Elections to the lower chamber of the state legislature are held every two years, and there are no term limits for the lawmakers.

Esther Agbaje was born in St. Paul, the state capital of Minnesota, to Nigerian immigrant parents. Her father, Rev. John, an Episcopal priest, met her mother, Bunmi, a librarian, at the University of Minnesota where they were studying.

She graduated from George Washington University, Washington D.C., with a degree in Political Science. She currently works as an attorney in Minneapolis with a focus on general civil litigation and medical malpractice.

She once served at the U.S. Department of State as a Foreign Affairs Officer, charged with managing the rule of law projects in the Middle East. Her priorities as a lawmaker include affordable housing, environmental justice, police reform, public safety, and racial equality. (NAN)

African women are shattering glass ceilings. Congratulations to @go4esther on this impressive achievement.

This article was  culled from Saharareporters

#LLABlog- Meet Raby Gueye, Founder and CEO of Teach For Senegal, which seeks to raise educational outcomes in Senegal so that one day every Senegalese child feels seen, loved, and liberated.

Raby Gueye is the founder and CEO of Teach For Senegal, which seeks to raise educational outcomes in Senegal so that one day every Senegalese 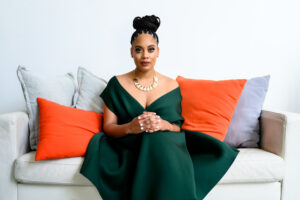 Jasmine Lawrence currently serves as a Product Manager at Everyday Robots, a project from X, the moonshot factory. Everyday Robots is building a new type