Khalia Braswell Sacrificed Her Dream Job to Help Women of Colour in Tech and She’s Loving it!

Founder and executive director of INTech Camp for Girls, Khalia Braswell is an award-winning technologist with an expansive career.

Khalia attended North Carolina State University, majoring in computer science, ultimately receiving her Bachelor of Science degree in computer science from the school’s College of Engineering. It was during her time as a grad student at UNC that she created INTech Camp for Girls. INTech’s aim is to inform and inspire girls of color to consider careers and jobs in the technology industry.

Khalia founded INTech in 2014, and since then, she and her team have given more than 1,200 girls exposure to STEM training and mentorship from other women of color within the tech and engineering industries.

Changing a girl’s life in 8 hours inspired Khalia to set up her own NGO, she said, “Originally, I just wanted to do an event with a grant that I received. However, an hour after the event, I received an email that said I had changed a girl’s life in eight hours. The tears began to fall, and I knew then that I would have to continue this work. Fast-forward to now and that girl is my mentee, has Adobe Certificates, has been to the Grace Hopper Conference, which is the largest tech conference for women in the world.”

Of course, Khalia has been faced with a lot of challenges, “The hardest part is when you’re a solo-preneur and you don’t have anyone else in the trenches working on your business the way that you do, and you can’t delegate as much. You’re the CEO, CMO, the CTO, the everything and at times. It gets hard trying to figure out what to prioritize and how to manage yourself so that you can get out of your own way.“

Thankfully, her hard work pays off when she impacts positively in young people’s lives, “Re-connecting with one of our original INTech Scholars and finding out that after graduation, she intends to major in computers is one of my proudest moments. We held our first camp on April 26, 2014, and Rhynne was a 7th grader. On her application, her mom put that she hadn’t had exposure to tech prior to coming to INTech and fast forward five years later, she’s now an incoming freshman in Computer Engineering at North Carolina A&T State University. It shows that what we do really works, and I can’t wait to see more of our scholars graduate and go on to study computing/engineering.“

Khalia is definitely one leading lady we love. 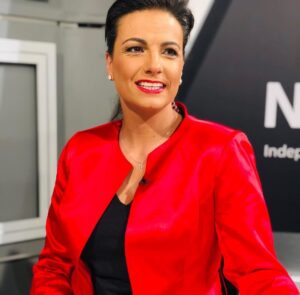 #LLANews: Leanne Manas has received the award of Chevalier de l’Ordre national du Mérite (Knight of the French National Order of Merit) at the French Embassy on behalf of President Emmanuel Macron.

#LadyBossInterview: “Keep adding value to people as the core of everything you do -that’s all that matters, everything else will follow.” #LLA Meets Lady Boss, Tobi Olanihun , Chief Experience Officer, WOW!Connect Services Ltd, and Founder, TEPS.

Tobi Olanihun is the Chief Experience Officer of WOW! Connect Services Ltd, an experiential event agency for individuals and corporates, creating exclamation-worthy experiences. She is