“I Don’t Believe We Should Brand Ourselves, We’re People, Not Commodities.” Sheila Nortley, UK Based Ghanaian Film Maker. 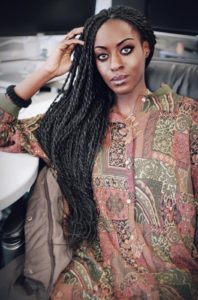 Sheila Nortley is defying the odds and very deliberately projecting a message of ‘You can be anything you want to be irrespective of what people think or say’
Sheila is woman, black, african, muslim, film maker, wife, mom of three and then more. Find out more about Sheila in this week’s Lady Boss Interview.
Hi, Sheila, it is lovely meet you, so can you introduce Sheila Nortley to us?
(Laughs) How do I introduce myself? What do I say? My name is Sheila Nortley. I run a Production Company called Dreamscape Films and just wrapped an amazing feature film called The Strangers. And I’m a screenwriter. How’s that? (Smiles)
What informed your decision to become a screenwriter? Did you ever think you would become a screenwriter and an actress?
It’s something I didn’t really decide, as cliche as that sounds. It’s a path that was kind of carved out for me. I think a lot of the time, for most writers, you’re always a writer, you’ve always been a writer. It’s just about having that moment where you fully accept it and making a decision, in that moment, to embrace it and run with it and identify as it. And that, in itself, is very liberating whilst at the same time, quite frightening. I started writing stories and short novels and plays as soon as I could hold a pen and this just slowly evolved with age and technologies and experience. So I guess I always knew deep down I was a writer but an actress, never. And even now, though I’ve tried it, I don’t think I’d do it again.
Tell us about your major projects and how they have influenced you?
Sable Fable influenced me the most. I mean, that was life-changing. It was so intimate and so beautiful and I really feel like I connected with the actors in the project. I had to dig deep though. I mean really deep. The film dealt with issues of identity, race, relationships, beauty, self-love and self-hatred through the kaleidoscope of racialism and, especially as our director Stephen Lloyd Jackson wanted it to be improvised, it was a very introspective and almost intrusive process. I mean, we had to method act. I had to revisit some of my own insecurities and fears which had been buried very deep but were just, you know, lurking in my subconscious and I had to bring them to the surface and delve into them. It was a very beautiful experience and I think it influenced me in a big way. It was a foundation for me to tell beautiful stories and for that to always be the goal. I’ll always have a deep respect for Stephen.
How has screenwriting and acting changed the way you see the world?
It makes everything beautiful somehow. Because it makes everything a story. It allows me to see stories in day-to-day experiences. It allows me to see characters, multi-dimensional characters, in every person I meet. I mean, no one is just a villain or just a victim. Everyone has a little bit of everything and it’s just the way you choose to write their story, the angle from which you choose to tell it, which colours the way that person is received. So I honestly try to see the best in people. But yeah, I wonder through life seeing it as a tapestry of stories.
If you weren’t a filmmaker what would you be doing?
I really have no idea. I tried not being a filmmaker once; didn’t work (laughs)
What are the challenges that come with being a black,muslim, female filmmaker? And what keeps you going?
Honestly? It’s only the fear, really, of being presented as some kind ambassador for an entire community. I just want to make films. And I find that people are always looking for a way to categorise people – which is cool, I get it. I just really don’t see myself as a role model or even an inspiration. This is because I am with myself all the time. And I know there’s nothing particularly remarkable about me except a gift that I was given – and that reflects more on the generosity of the Giver of the gift than the receiver of it, if that makes sense? So, I get nervous that people will criticise me if I do or say something which they feel contradicts or falls short of the brand that they feel I should have. I don’t believe we should brand ourselves, I think that’s dangerous. We’re people, not commodities, we’re not products. You brand products, right? How can you brand a living breathing thing that’s trying to grow?

What is success to you and what do you consider the secrets to your success?
There is a verse in the Qur’an in which God himself swears that ‘he who purifies his soul is successful and he who corrupts his soul fails’. We’re in a world which is so artificial and it promotes an artificial ideals of success. We’re taught that popularity is success. So people do all they can to look and feel popular and end up often entirely lonely and desperately desperately unhappy – seeking validation through anything and everything trying to find peace of mind. I don’t really have any secrets as far as success goes. With my career, I just do what I love and try my upmost to work with kindness and integrity and I work hard.

Can you tell us about some women that are mentor figures/major influences to you?
My mother. My mother is a real lady. She has been through a lot in her life and she has always carried herself with dignity, humility and a grateful heart. She is my number one role model in terms of womanhood. I absolutely cherish her. In regards to writing, I  love Misan Sagay. I think she’s wonderful.

What problem would you say Filmmaking is solving particularly for women in today’s world?
It’s a voice. You know, any opportunity to be heard and to have ownership of a dialogue is powerful – for any under represented group

What are your next big plans/projects that would improve the filmmaking industry?Wow, that’s a big question. The filmmaking industry is massive. I guess, my humble contribution is just me. It’s my ideas, my films, my scripts, my Production Company. I’m building Dreamscape Films up now and I’m pleased with the films on our slate. We’ve just wrapped a feature, I’ve got another feature and a short in the pipeline too. We’ll see how it goes (smiles)

You are a wife and mother, Can you tell us how you have been able to balance your personal life, challenges and your passion?

I do a lot of my work when the children are sleeping. That’s when I have time to really write; late at night and early in the morning. My family are very supportive. Family is my rock. I also bring the children to work with me sometimes so my son’s favourite place is the office. We set up a mini-creche in there now with some toys and kids stuff. During The Strangers, I knew I couldn’t direct the film, with a nine-month old daughter. That wouldn’t have been fair on either of us and she has rights over me as her mother for my time and attention. I did visit the set as a writer and when I did I’d bring my her to set with me on a sling. She’s eleven months now and she started solids late so I was exclusively breastfeeding her throughout preproduction and pretty much for most of the shoot. Not easy, but had to be done. So I’m like ‘I’m just going to make it work.’ Regarding being a wife, I’ve been married for five years now and I met my husband in secondary school when we were fourteen – he knows me and he understands me, and we’re in this together, growing together, he’s very ambitious and he likes what I’m doing and supports me as much as he can. I let him be a man, he lets me be a woman; most importantly he lets me be me and I let him be him.

What inspires your scripts?
Real life usually. There’s usually something I’ve seen or someone I’ve met and then I just run with it.

Are there instances in your career that you made decisions and took certain choices you wish you hadn’t? What would you do differently?
You know what? Just one really, and that was a while ago – around seven or so years ago. I probably didn’t realise at the time, but looking back, I was a bit immature about making a certain decision in my career which would effect someone who was a friend at the time. I didn’t really consider his feelings or perspective. When I realised that he was hurt it honestly took me a while to understand why  – possibly because I was more concerned with what I was doing. I think it took me around a year to really understand his perspective and I apologised but looking back I feel I lost a friend.
Do you identify with feminism? What does feminism mean to you?
I think the word feminism has evolved  and now it means quite opposing things to different people. I believe in women’s rights. I believe in equality. I also combine that with the knowledge that men and women are physically and emotionally different. For me, I guess my feminism is that I embrace my femininity, I enjoy being a woman. I believe we are very beautiful, very powerful beings.
Can you give a few words to young girls or women out there aspiring to be in your field?
I’d say your value as a writer isn’t in how you look or speak, but in what you have in your heart and mind and your ability to communicate that with the world. And as society is developing and technology and social media is taking over everything, don’t worry about any of that, what you have is ancient and beautiful. Don’t be afraid of yourself. Just work hard, and don’t procrastinate, start now.
Sheila Nortley can be reached on all social media platforms including Instagram as @sheilanortley

The LLA Lady Boss Series is a weekly interview series that highlights the achievements and entrepreneurial journeys of African female entrepreneurs. The idea is to showcase the Leading Ladies who are transforming Africa and the African narrative through enterprise and business.

It is an off-shoot of Leading Ladies Africa, a non-profit that promotes leadership, inclusion and diversity for women of African descent.

If you know any kick-ass women of African Descent doing phenomenal things in enterprise, email lead@leadingladiesafrica.org, and she could possibly be featured.

PrevPrevious“Determination and Hardwork Births Success”- Grace Chito Mark, Millener and CEO, ‘Graces Hats’.
Next“How Can Anyone Not Be Inspired by Woman? I Find So Much Beauty In Women That I Come Across” Art By Rewa.Next