Where Are My Black Women At?? Why You Need To Add ‘The Black Girl’s Bible’ To Your Bucket List. 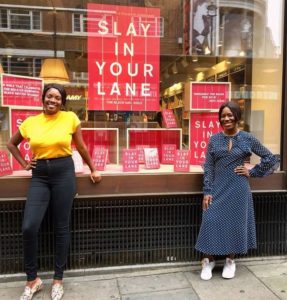 First things first, how about we gather round and send air kisses to Yomi Adegoke and Elizabeth Uviebinene. These women stood up for us, same way our mothers would. They wrote about life through the eyes of a black woman, made it a book and then named it ‘Slay In Your Lane’.

What inspired Slay In Your Lane?
Well, just like you and I, they too were tired of reading self-help and motivational books that were written for women but highlighted the stories of women of a certain kind and trajectory. Imagine reading a book and mentally negotiating with the author.

“Instead of writing from this angle, you could have tried this angle so that this point comes across as more inclusive”

“Why does your book spotlight issues peculiar only to women of a certain descent?”

Elizabeth, had a light bulb moment after having bants of mental negotiations induced by Sheryl Sandberg’s ‘Lean In’. She thought to herself, rather than wait on other women to shine the light on the various indignities that attends to being a black british woman, why don’t I do it.

Except, she was a marketing manager and she didn’t think she had what it takes to write a book. What to do? Pitch the idea to her journalist friend, Yomi. According to her, “Because Yomi’s a journalist, I thought she would write it and I would market it.” It seemed like a deal, until Yomi proposed instead, that they both write the book. 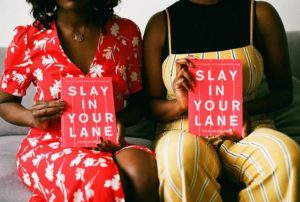 How Is Slay In Your Lane Different From Other Books?
Slay In Your Lane unlike other books doesn’t just narrates and inspires, it also incites and gives visibility to Black British women, equipping them with resources on how to get ahead in their career and life generally.

The book projects many African voices on issues ranging from mentoring to dating, reproductive health, career and mental health. It debunks myths and perpetuates the unconventional pursuits and accomplishments of Black women. 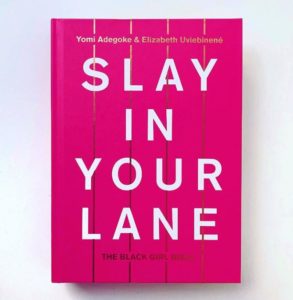 Yomi and Elizabeth also interviewed a host of black influential women including ITV newsreader Charlene White, Radio 1 DJ Clara Amfo, Author Malorie Blackman, Keisha Buchanan, Bee Tajudeen and Nicole Krystal Crentsil sharing their stories, experiences, shortcomings and challenges. They also had a photoshoot with these women which was added to the book making it a proper compedium that addresses the diverse needs, travails and interests of black women.

An interesting part of the book is reading both women demystify sayings like “go and marry”, “does yor mate have two heads” that is common to black parents. Nafisar Akabor describes Slay In Your Lane as “arguably, the best book in 2018”. We think so too.

PrevPrevious“I Want To Become The President of Uganda” Proscovia Alengot Oromait Is Teaching Us That We Are Not Too Young To Lead.
Next“Different is Beautiful” – Khoudia Diop Reminds Us Of The Beauty Embedded In Diversity.Next 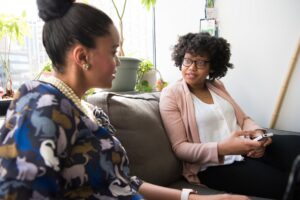