“Water Is A Catalyst For Change”- Saran Kaba Jones. 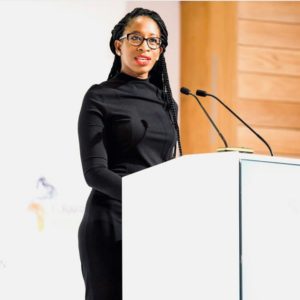 The decision to start FACE Africa was informed by Saran’s experiences especially her experience as an ambassador’s daughter during the 2003 civil war in Liberia.

After spending nearly two decades abroad, in 2008, she decided it was time to return home to Liberia. On getting home, she discovered that women and girls were spending hours walking to fetch water, and this was stifling their productivity. Not one to sit and gripe, she decided to do something about the situation.

As a 26 year old investor with the Singapore Economic Development Board at the time, she had thought she could spend a month in the country, launch an educational scholarship fund and leave knowing she had done something for a nation that had nurtured her since she was 7 years old. However, It soon became clear to her that instead of flagging a scholarship scheme, the water crisis in Liberia, needed to be met with immediate intervention hence, she decided to start an initiative to bring clean water, sanitation and hygiene programs to the affected remote communities.

This, in addition to the fact that kids, especially girls were missing school so they could haul water home.

To date, FACE Africa has completed 50 community WASH projects directly benefiting 25,000+ people in rural Liberia. Thus, providing safe water to communities daily. Saran also ensured she built an initiative that could run without her hence, ensuring sustainability for the project for coming years.

For her contributions to the socio-economic development of Liberia, she has been profiled in the Boston Globe, and CNN Inside Africa. She has also been listed as 2013 Guardian UK’s Africa’s 25 Top Women Achievers, Forbes Magazine’s 20 Youngest Power Women In Africa.

Digital Communications & Storytelling Lead Leading Ladies Africa is a women-focused non-profit based in Sub-Saharan Africa. Our mission is to build a diverse and

#LadyBoss: “Passion, Resilience and Tenacity are key characteristics for survival in business’’ – Ameera Abraham, CEO & Spa Director of The Nail Bar and Founder of Amali Cosmetics

Ameera Abraham is the CEO & Spa Director of The Nail Bar, a luxury nail spa and wellness centre and the founder of Nigeria’s premier