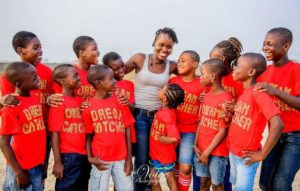 Dream Catchers are a team of indigent children taken off the street, whose welfare (education, food, health care and shelter) are taken care of by Seyi Oluwole with the aim of sending them to school through dance.

Growing up for Seyi was tough, From a family with financial issues, sleeping in churches , staying in a slum, she met some kids and realised even there that her reality was different from theirs and decided to turn her situation into a means to make impact through hard work.

At age 14, She picked some kids off the street, giving them a better life by training them on dancing skills, begun a dance group (Victorious Dancers) with these children and with her pocket money did an outreach event for children in Ebute Oyingbo.  In 2009, she held a free summer for approximately 150 children in Oyingbo and gave them school supplies at the end of the program.

In 2012, she left for the United States with the intention of starting a new life and saying goodbye to the tough Nigerian life but felt lost with no children to work with. She joined the children department in church and started working with an organization that catered for risk children in the United States.

However, they weren’t like the ones in Nigeria, so she packed her bags and came back to Nigeria, against the advice of so many people. Once she got back to Nigeria, she began looking around and gathering risk children again then started a community learning centre for indigent children in Imota Ikorodu.

Starting with sixteen (16) kids, the dream catchers have gone forward to perform in Nigerian Music videos, concerts, received an award, and even a visit and an introduction on stage by Naomi Campbell.

Dancing has fed and kept these kids in school, It has improved their education because she orientates them that without doing well in school they won’t be able to dance. The kids embrace Dance, away from their sad homes, which helps them grow.

Seyi takes those in public schools into private schools, spends time teaching them to read and giving little assignments to avoid some going right back to the streets  Well done! Seyi for being such an inspiration.