LLABlog: Top 5 Women in Media and Entertainment that were Listed Among LLA 50 Leading African Women in Corporate For 2022! 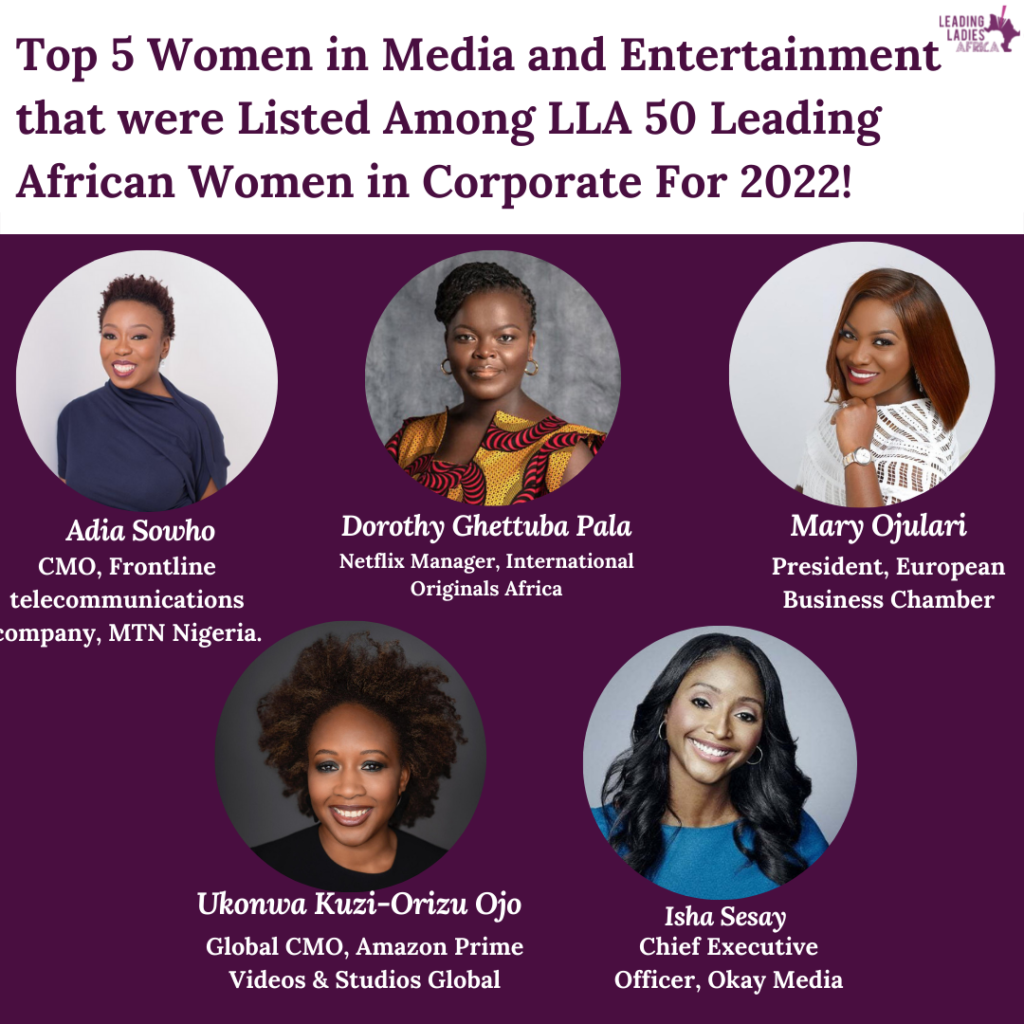 Dorothy Ghettuba Pala — is the Netflix Manager, International Originals Africa and the Chairperson of the Kenya Film Commission Board. As Head of African Original Programming, she is cultivating African stories to release on Netflix’s immense, global platform.

She started her journey in the media and entertainment industry by co-founding Spielworks Media Limited, a regional leader in content creation, production, distribution and broadcast. In ten years since its inception, Spielworks has produced award winning properties; 18 Television Shows, over 20 shows for the web and over 40 movies for Television. Dorothy is also the co-founder of Keja TV an online Social TV Channel targeted at Africans in the Diaspora and on the continent.Dorothy through her companies is dedicated to developing creative talent, creating quality content and telling authentic African stories that engage audiences. She is passionate about solving problems from an end user perspective and uses Design Thinking as a tool to achieve this.

Dorothy was recognized as Business Daily Top 40 Under 40 Women in Kenya in 2011 and 2014, Top 40 Under 40 Women in Film in Africa and Msafiri’s Top 50 Business People in Kenya. She is an alumnus of The Bucerius School of Global Governance in Hamburg, Germany and a 2016 Archbishop Desmond Tutu Fellow. She is a graduate of the Stanford Institute for Innovation in Developing Economies SEED program and she is dedicated to telling the African story.

Adia has over 20 years of experience spanning the telecoms and consulting industries. She began her career in 2001 in the U.S. Cellular Corporation in America as a Radio Frequency Engineer, before moving to Deloitte Consulting LLP, Chicago, the United States of America as Management Consultant in 2007. In 2010, she returned to Nigeria and joined EMTS/Etisalat Nigeria/9Mobile holding multiple leadership positions as Head Strategy and Business Development, Head Digital Media and then Director, Digital Business until her departure in 2018.

She then joined Migo formerly Mines.io, San Francisco, CA, U.S.A as Managing Director for their Nigerian Office and then Vice President, Growth between 2018 and 2020. She joined MTN from Thrive Agric, Nigeria where she served as the Chief Executive Officer, bringing to MTN key knowledge and expertise in commerce, strategic business planning and growth, digital infrastructure and a track record of designing, building and scaling tech-driven platform companies in emerging markets delivering +$100M businesses.

Isha Sesay —  She is the Chief Executive Officer of  Okay Media. Her roles include launching the production of programs that would amplify the voices of black people in the diaspora.

She also serves on the board of directors at Okay Media. Before joining Okay Media, she spent 13 years as an international reporter at CNN, and became an accidental activist after  leading  the coverage of the 2014 kidnapping of over 200 Chibok girls  in Northern Nigeria. She anchored CNN “NewsCenter” and also hosted CNN’s “BackStory”  where she was able to highlight a lot of issues in Africa. She became a Goodwill Ambassador for UNFPA in 2020. She is also the author of  ‘Beneath the Tamarind Tree’.

Mary Ojulari — She is the President of European Business Chamber (Eurocham) and Deputy Managing Director at Weststar Associates Limited(Mercedes-Benz Nigeria).

She is a focused and result oriented finance executive with over 20 years’ experience of which she spent 12 years working in the diaspora. She has worked in a range of senior and director level roles in the media and service sectors. She has a reputation for setting strategic direction and establishing robust working relationships with relevant stakeholders.

She started her professional career with KPMG UK and thereafter moved to Whitbread PLC, the largest hospitality company in the UK. At Whitbread PLC, she was part of the team that implemented change management and carried out the due diligence for the sale of 160 restaurants to a Venture Capitalist. Mary worked in the media industry for 12 years (British Broadcasting Company (BBC), CNBC Africa & Forbes). She worked in leadership roles at the BBC, CNBC Africa & Forbes providing strategic direction and ensuring short to medium and long-term plans for the companies were viable and implemented.

Prior to this role, Ukonwa served as Global Chief Marketing Officer and Senior Vice President for M.A.C Cosmetics, a multi-billion dollar cultural icon and the world’s #1 Makeup Brand. Before that, she served as Global General Manager & CMO for an iconic portfolio including CoverGirl, Clairol, Sally Hansen, Rimmel, and Lifestyle Scenting/Fragrances. She is  a seasoned C-Suite Executive & General Manager that brings simplicity to complexity, with over 2 decades of experience delivering business results through a differentiated vision and strategy, astute P&L and operational management, creative communication that cuts through, social/digital/product innovation, and leading teams to achieve more than they think is possible.

Over the course of her career, she has been recognized with over 50 awards and honors for driving outstanding market leading results and delivering creative campaigns/innovations that motivate people to act including Forbes 50 Most Influential CMOs, Business Insider’s Most Innovative CMOs, Variety’s Most Influential Women in Entertainment, AdAge 50 and A List, Adweek 50, WWD Brand Builder of the Year, WFA Global Marketer of the Year List and Financial Times Upstanding 100.

PrevPrevious#CareerConversations: “It’s either the best or nothing. Do you! You are not to prove a point to anyone.”– Elizabeth Ameke, a Baobab Platform Mentor with the MasterCard Foundation and former Safety Officer with PassionAir.
NextLLANews: FirstRand Namibia has appointed Taimi Shejavali as new CEO and portfolio manager to lead the Ashburton Namibia business into the future.Next