Child Bride Turned Professor, Tererai Trent Has Just One Mission: To Teach Others That, “It Is Achieveable”. 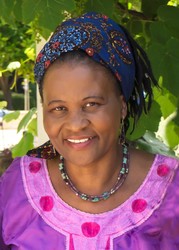 If anyone tells you that a dream is impossible, whenever you’re discouraged by impossible challenges, just mutter this mantra: Tererai Trent

Married as a child bride, she defied the odds with her higly active imagination and burning quest for a better life. Her curiosity and pursuit for a good life somehow placed her in a room where an inspirational talk was given by ‘Jo Luck’ of Heifer International. Tererai had written down four incredible pursuits having had that encounter with him. Those dreams were to travel out of Zimbabwe, get a university degree, a master’s degree and a Phd.

Raised in a background that was heavily steeped in cultural norms and did not count a woman’s ambitions as valid ,to have conceived, nutured and actualized those dreams was a huge feat.

Using her brothers school books, Tererai who had mothered three kids at 18 taught herself to read and write, and today, is an internationally recognized voice for quality education and women’s empowerment in Africa. After she earned each degree, she returned to Zimbabwe, unearthed her dreams which she had written down and buried in a tin scrap and checked off each goal she accomplished, one by one. In December 2009, she earned her doctorate from Western Michigan University. Tererai also published a children’s book about her own life called ‘The Girl who Buried her Dreams in a Can’ detailing her story of determination and resilience and recently published ‘The Awakened Woman’.

In May 2011, Oprah Winfrey revealed that Tererai, was her all-time favourite guest, and donated $1.5 million so she could build her own school in her old village in Zimbabwe. The school was completed in 2014 and today has contributed to a very large extent Zimbabwe’s educational system, providing education for over 5,000 children since its establishment.

Leading the global charge in the fight for women’s rights and quality education for all children, she currently sits as an adjunct professor in Monitoring & Evaluation in Global Health at Drexel University.

Tererai is a human reminder that talent is universal, while opportunity is not. Her compelling story motivates people to fight for their own dreams, as well as the dreams of others. She has become a symbol of hope for everyone, and living proof that anything is possible. In her favorite words,  “Tinogona,” meaning, “It is achievable!”

PrevPrevious#LadyBossInterview “I Have Never Really Been Afraid Of Competition, If Anything I Believe Competitors Are There To Ensure That I Bring Out The Best From Myself”- Debbie Larry-Izamoje.
NextOn Kechi Okwuchi and Five Lessons That Resonates With Us From Her ‘Girl Know Thyself’ TedX TalkNext