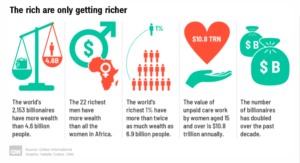 Global inequality is “out of control” because of biased economic systems that exclude many women while allowing billionaires to amass huge fortunes that do little for society, according to Oxfam International.

Oxfam’s annual report on inequality was released ahead of the World Economic Forum in Davos, Switzerland, which each year brings together many of the world’s wealthiest and most influential people. Among the report’s key findings:

The 63-page report argues that world leaders are not doing enough to address the widening gap between the poor and the rich. It focuses this year on policies that allow men to dominate the top ranks of business and government. Economic inequality, the report argues, is built on gender inequality.

“Women are supporting the market economy with cheap and free labor and they are also supporting the state by providing care that should be provided by the public sector,” the report states. “This unpaid work is fueling a sexist economic system that takes from the many and puts money in the pockets of the few.”

Oxfam warns that aging populations and cuts to public services threaten to increase the burden on care workers and stoke further inequality.
“Both the dramatic level of economic inequality and the looming care crisis can be tackled, but it will require concerted efforts and bold policy decisions to mend the damage done and to build economic systems that care for all citizens,” says the report.
What are your thoughts?